Hi everyone - I am not actually sure where to post this, but I hope this subforum is okay.

A couple of weeks ago I figured it would be fun to try my hand at CAD software. While I use 3D software almost daily I never really had a try at creating models for 3D printing or CNC. So to learn a software and to wrap my head around some of the concepts used in CAD I fooled around and created an almost complete model of a classic Game Boy case and while at it made it a Game Boy Zero.

The thing is – now that I am pretty much finished I have little use for it. I don't have a 3D printer and I haven't planned on creating an actual model from it for myself. So I figured maybe someone else might have use for it.
The measurements for this model have been taken from an original classic Game Boy DMG and I did my best to reproduce it as accurately as possible. Most parts should be placed correctly (that is down to a fifth of a mm) as long as they are possible to measure without destroying the case I used. However there is still a margin of error due to me making mistakes or parts being so inaccessible that I couldn't get a clear measurement and simply had to guess.

Also the model is not fully finished in and around the battery slot. This is because I still haven't built my first GBZ and was not quite sure which parts of it I would want to remove. On top of this right now the three parts of the model fit each other tightly in the software without even the slightest space in between. I do not have any experience in working on a usable model so that might turn out to be a small problem.

Furthermore I have not been able to actually test the model. As I mentioned I do not have access to a 3D printer.

The GBZ features so far include holes and mounting for additional buttons, large screen cutout and removal of the affected counterbores and the cutout for the USB needed for kite's SAIO board.

Soooo... to finish this – would anyone be interested in such a model? I would take the time to clean it up, add/remove features where possible and upload an STL or whatever format is best for printing. 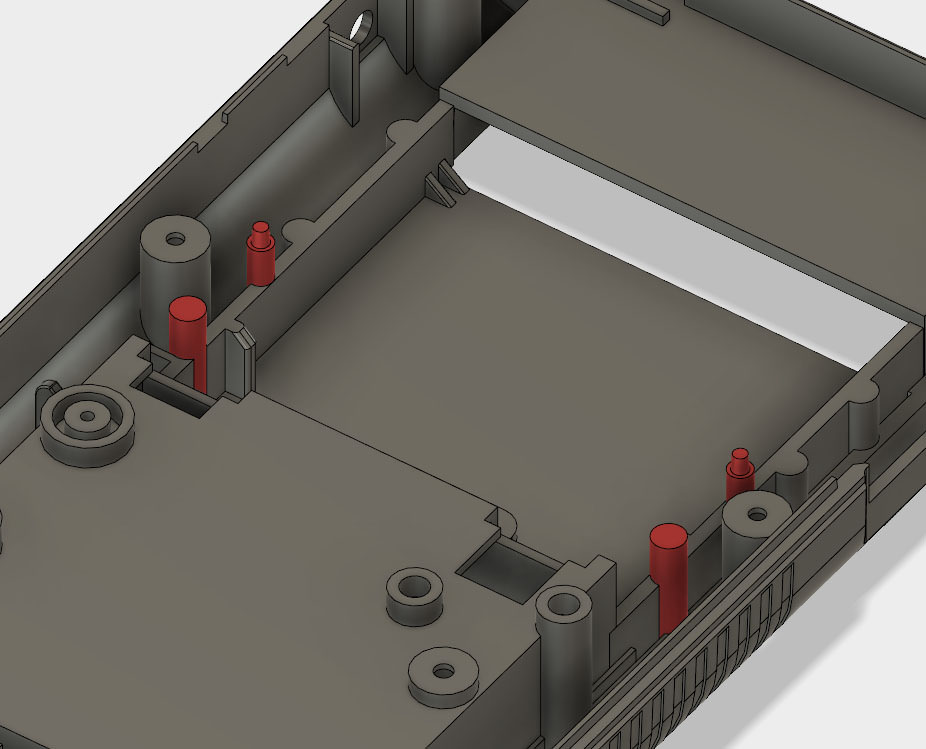 –––
DOWNLOADSShow
If you need formats not listed here, please post in this thread and I'll see if I can add them.

That looks really really good. A few people have had a stab at doing this, but all of them have aborted before finishing them.
so yes, Please, finish cleaning up the model and share it if you want to do that.

I'm not sure how well it'll print, but I'd have a go at it. bear ini mind that with repro cases so cheap, most people are happy to just mod one of those. and printing one yourself with SLS (shapeways) still costs a lot more. FDM is cheap when you own (or have use of) a printer but would cost more than a repro case to get a [3D Hubs for instance] service to print it for you

I can see many more usage to this than just printing to use it...
i have a lot of difficulties to setup my 3D parts to keep everything in place without any glue so this kind of model would help a lot because one can make a test fit of any type of component in 3D before digging in final assembly.

For now, i basically design my pieces, send them to my hub from 3DHubs, wait a while, pay a bit, receive the parts, test them, adjust, then send files for printing again. This is killing me and killing my wallet lol

looks very good. Front half should be quite easy to print. if needed i can print it for you

back case is a bit problematic and lot of support will be needed.
Top

Same here, if you need any help printing, let me know

Thanks for the compliments, guys.

I'll try to find some time this weekend to finish the model (aaand I just realized that I forgot the little pins that hold the silicone under the buttons). Is there anything else you'd like to see in the model? I think at least some holes for cables in the battery slot should be needed. Or would it be better to strip away most of that slot as some of the builds I've seen here do? What about counterbores? Is it a good idea to already have holes for the screws or would it be better to drill/melt them in later? What about their depth? Do the thin parts a little more support so they don't break?

@abrugsch:
Yeah, I am aware that this model is possibly useless due to cases so cheap and easily available. I got me some myself to build my GBZ and I never actually aimed to rival those. All I wanted to do was to try out a CAD software so that if I want to make my own case some time later I'd be able to (or at least be able to decide if that would be a futile attempt).

@YaYa:
That would actually a pretty cool use of the model – I never thought about that!

@kubino & WLCD:
Thanks for the kind offer, guys! I currently don't want this model printed for myself though. But I'll keep you in mind if I'll create one that I do want.

– "The biggest trick the devil ever pulled was convincing the world he didn't exist." –
Top

Please don't touch the battery tray lol. Many people take it off but some like me want stock look without butchering... lol

As for me, i don't care the hole for screws as i will never print it but i presume it would be better to let the holes blind so everyone can drill as needed
Follow me on instagram

How much would cost to get these made in good plastic in China like the original cases? I mean, it would be hella cool to get this made with mold casting (or whatever it is called) and get printed (like embedded in the case, not just regular ink) a nice "Sudomod's Game Boy Zero" instead of the Nintendo logo hahaha
Top

It would cost a lot... the most expensive part of the work is the mold. I'm not sure the demand can make a convenient RIO on a mold
Follow me on instagram

That's a fun idea, but I think that might be quite expensive – unless you order half a million parts or something like that.
IIRC such molds are made from thick metal blocks (two per model part) that need to be carved out so that they fit each other perfectly with the space for the model in between them so some machine can press hot polymer into that shape. There are videos on wikipedia on injection molding and how Lego bricks are made. The involved machines are quite massive and look freakishly expensive.
– "The biggest trick the devil ever pulled was convincing the world he didn't exist." –
Top
Post Reply
230 posts