Hi everyone. Pierre here from Quebec city Canada so forgive my bad english it's because of the cold weather. Instead of polluting the Discord, I have decided to write a follow my builds log. It's my first time building and I am getting a lot of help so big thanks to all I am really enjoying it so far. Here are the specs for my build: So I have my basic specs parts (thanks Wermy and Helder for speedy shipment) and have started to receive other parts, mostly from AliExpress which is taking a long time because of free shipment. Will definitely look into ePacket shipment next time which is much faster.

After watching Wemy videos for second time, firgured out that I had wrong 3D parts (see photo) because I would be using a 2.2" screen with welded wires instead of 2.4" screen with ribbon attachement. So reached out to Wermy who shipped out the right 3D parts for 2.2" screen half.

First order of business was preparing the tin. Used a small one hand dremel I got from my local electronic store and a 3D printed guide Wermy sent me. Worked out good and fast very pleased with result. Will be doing small adjustments with hand file later when I get parts for final fitting.

Next up fusing the pi Zero to the board. Very nervous because first time welding. Took advice and practiced a bit on other parts but visibly not enough because after testing continuity, I had to start over a few points thats why you see darker marks where it got hot. Changing for smaller pin tip on welder helped solder to reach bottom board.

After following conversation on Discord, learned Helder had a few Low Battery Monitor PCB so ordered one of those and installed it.

Getting better with iron.

Got a local guy to print extra 3D parts. I got the STL files for the print from the "FAQ" section on the Wiki build page here:
https://www.sudomod.com/wiki/index.php? ... intyPi#FAQ

The quality was far from Wermy parts but for the price, can't complain. Printing 23 g is very cheap.

Since I have extra parts, ordered second kit this time from Helder with 2.4" screen and ribbon attachment. Not much difference between 2.2 and 2.4 screen.

The 2.2" screen did not fit 3D parts as is so needed to remove SD card reader and pins. Better to snap off pins then cut. If you cut, you will need to file them down for fitting.

If you keep screen board, 3D screen holder needs small modification in left screw corners to fit screen in.

You could always change 3D model before print or other option is to use a minimal board iliPlate from OSH Park like this one I was told would also work.


you can cut a lot more of the board, most of it isnt going to be used......
(it might help a little with getting it to fit and sit more flush) 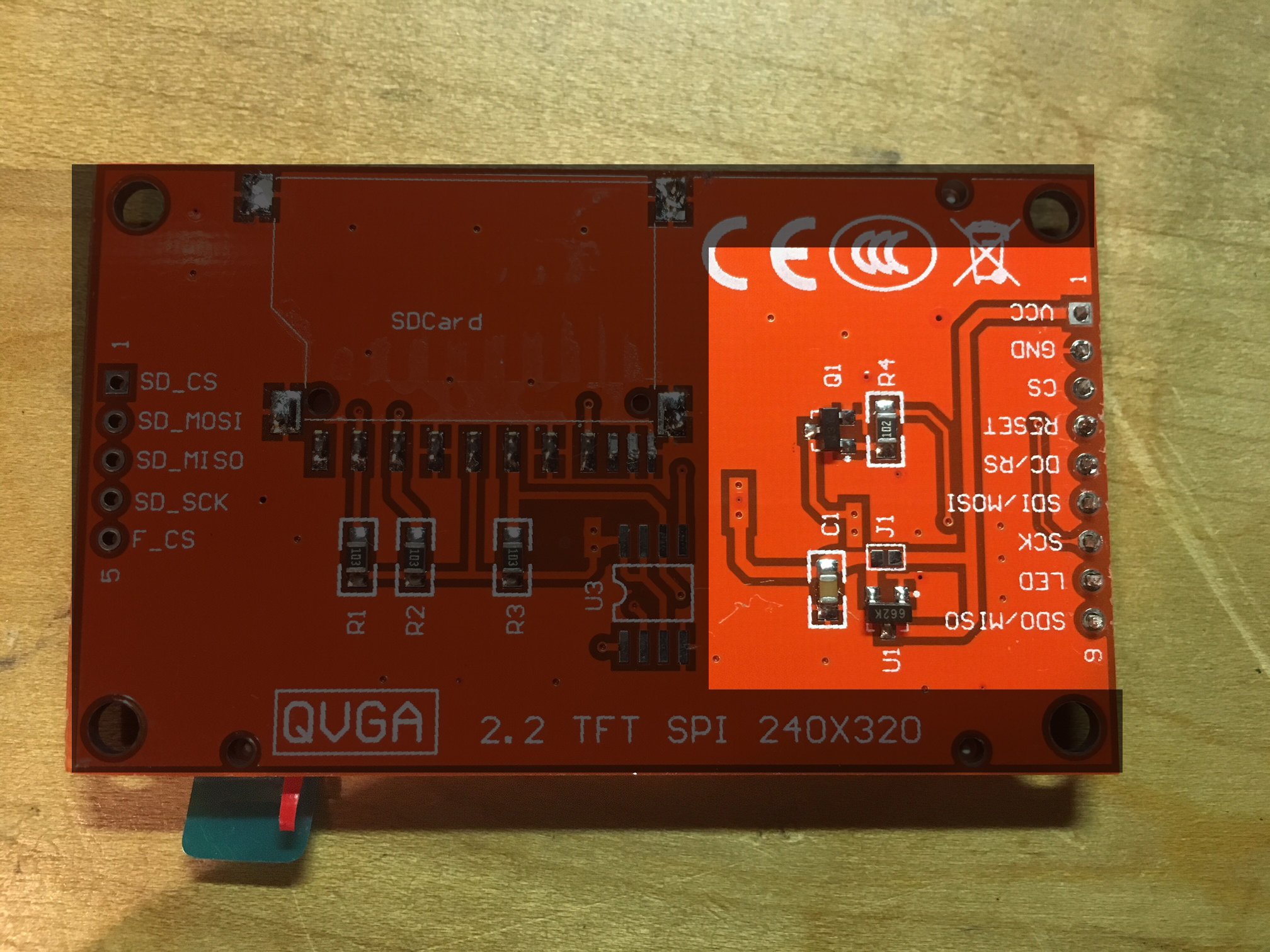 Good to know which part of the board is used. I guess SD_xx prefix is for SD reader.
Left board full length of screen because it makes it a flat fit.

Found a great reference card (teaching aid) for learning soldering on the Adafruit blog. Hats off to these guys and girls for there great work or should I say bonet because that's what they call there add on parts for the pi:
https://blog.adafruit.com/2016/12/26/ne ... ring-101/

The card was updated by @abrugsch on the Discord off-topic channel for using the pointed tip on the mintyPi projet which I have also found to be very helpfull.

I am still having issues with this part of the build. Hopefully as a group we can find a better way to fuse boards together. I understand space is an issue so presolder GPIO pins like the new Raspberry Pi Zero WH is not an option.

Tested it out to make sure the Raspberry Pi Zero and Retropie works using two adapters for screen (miniHDMI to HDMI to VGA) and one adapter for keyboard and mouse (miniUSB to USB). After system double booted by itself (one for expanding to card size) system is looking good.